Everyone understands the importance of shaping a story but few are as shrewdly proficient at manipulating the media as L.A. crisis manager Mike Sitrick, who the Los Angeles Times called “The Wizard of Spin.” 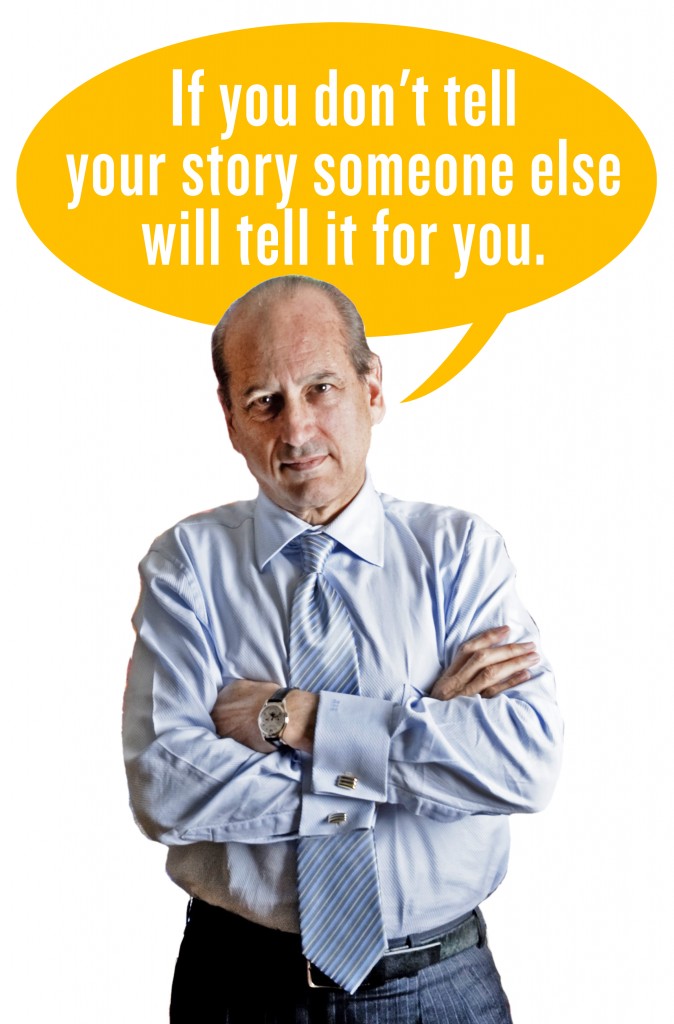 Everyone understands the importance of shaping a story but few are as shrewdly proficient at manipulating the media as L.A. crisis manager Mike Sitrick, who the Los Angeles Times called “The Wizard of Spin.”  A celebrity, arrested for soliciting a prostitute or going on a drunken rampage, confronted with a frenzied pack of reporters, is likely to call Sitrick whose firm has defended and rebuilt the reputations of scores of entertainers, athletes and other high-profile clients caught in the media glare. (His clients have included Paris Hilton, Rush Limbaugh, Michael Vick and Chris Brown to name a few, as well as embattled companies and high profile executives, many of whom Sitrick can only discuss off the record if at all.) Sitrick, whose uncanny ability to assess and understand the intricacies of how the media behaves and what makes an individual journalist tick, has a lot to teach anyone about how to deal with the media. His advice in a nutshell: “If you don’t tell your story, someone else will tell it for you.”

1. Strike fast. When a high profile client calls and says, “CBS Evening News is outside my door. What should I do?” we have to get the facts, assess the situation and establish a strategy in a matter of minutes. We have to know immediately who to contact and how. Some people worry about having the last word; my concern is getting the first and last word. Get your story out first so you can set the tone for the coverage that follows.

2. Prepare the client. Powerful people don’t like being challenged, but a crucial part of my job is telling the emperor or empress they have no clothes. CEOs wield incredible power, but I often have to explain to them that they can’t control the press. A celebrity might be able to act, but what if they don’t come across sympathetically in front of a camera after being been accused of shoplifting or trashing a hotel room? Before we put a client in front of reporters or cameras we rehearse them very carefully, the way a lawyer would. Tiger Woods isn’t a client of mine, but before his apologia press conference I would have rehearsed him, shot a video, and if it had come off the way it aired, I’d have done it differently.

3. Know when to do nothing. A journalist is taught to ask who, what, where, when, why and how. In my business, we add “so what?” Does anybody care? About twenty percent of the time, I tell a client: “Do nothing.” You can take a small matter and turn it into a major crisis if it’s handled wrong.

4. Identify your audience. When a client comes to us, one of our first questions is: “Who is the audience you’re aiming your message at?” For an actor in a crisis, that audience could be his fans, the movie studios or sponsors. For a CEO, it could be his company’s investors or government officials. The former wife of a hugely successful rock star came to us. She had been drugged and beaten by her ex-husband. She was suing the star for damages. But his lawyers wouldn’t even return her lawyers’ phone calls. Her audience, we determined, was three parties: her former husband, his record company and his lawyers. She was reluctant to go public with her story, but we convinced her that because of the nature of the physical abuse she’d suffered, we could use the media to reach her intended audience. We decided People magazine was the right venue. They put her on the cover. The impact was predictably huge. Her story generated enormous media interest, and of course, the record company put immediate pressure on her ex-husband’s lawyers to avoid further damage to the rock star’s reputation. Not only did the lawyers take her calls, they settled the suit shortly after.

5. Tell a story. Almost all newspeople believe in the power of the “story.” Regardless of how actual events occur, journalists believe that the best way to recount these events is in the form of a story with a beginning, middle and an end, with drama, conflict and surprising twists. This might be a highly stylized—even sensationalized—way of reporting on events, but this way of thinking is so internalized by members of the media that to get your message across to them you have to present that message in the form of a story, sometimes with clearly drawn heroes and villains.

6. Put yourself inside the reporter’s head. The media is not a pack of jackals or an impersonal machine. They’re a group of individuals with their own attitudes, anxieties and aspirations. To be successful in my business you have to be able put yourself inside a reporter’s head, influencing how he or she covers your client. Newspeople tend to be skeptical, idealistic, naïve and sometimes relentless, with egos larger and more fragile than the average person’s. For example, journalists love to scoop their rivals, so give a reporter exclusive access to your high profile client and you might have just made a grateful ally for life. It might seem obvious, but you’ll often get more sympathetic coverage for your client if you treat reporters with respect. Journalists believe their most important mission is to uncover the truth, so if you can persuade them with facts, or steer them to where they can find the facts themselves, reporting will follow.

7. Engage the media. It is a critical mistake for a client to brush off a crisis with a “no comment.” To a journalist, “No comment” usually means “guilty as charged.” Refuse to talk? Reporters will find someone who will. And that version of the story may not be one you like.

8. Correct every mistake. Today, stories pop up 24/7 and create media frenzies. No matter how outrageous the claim, many people believe what they read. If you leave an incorrect statement unchallenged it will spread through the media and live on in Google searches. Journalists and bloggers covering the individual will repeat the uncorrected mistake so many times that it will become conventional wisdom. When a media outlet gets the facts wrong, we go after them right away to correct it. To persuade a reporter to back off an erroneous story can require meticulous research. If they still won’t back off, we go higher up, contacting the editor or even the outlet’s lawyers to point out how much of the story is in question.

9. Find a lead steer. For all its iconoclasm and competitiveness, the media has a herd mentality. Finding a lead steer, a well-regarded reporter from a reputable institution willing to question conventional wisdom, can initiate a positive media stampede or reverse the direction of a negative one. We recommended this tactic to a well-known actress who came to us after having been involved in bad investment and a bankruptcy. Her story was complicated. It couldn’t be told in short news items. She was being vilified in the press. And, her career was suffering. We knew she would need to sit down and open up with an experienced reporter who had the ear of Hollywood. We suggested someone from the Los Angeles Times, Hollywood’s hometown paper, and warned the actress that it would not be an easy interview, no puff piece like those she’d been used to. But, because of the reporter’s reputation, we could guarantee she would have a fair interview. The reporter spent hours with the actress and her husband, as well as thoroughly reporting the other side of the story. For the first time since her troubles began, the actress came across as the vulnerable, hard-working professional she was. The story by this lead steer reporter changed the media’s attitude toward the embattled actress and drove news about her in a new direction.

10. Never lie. Public relations is about persuasion and persuasion depends on credibility, so you can’t lie. It’s the cardinal rule of PR. When high-profile clients get into situations, such as drugs, sex addiction or domestic violence, we advise them to admit the truth quickly, let the public know they’re seeking treatment for their behavior, and move on.