Scroll down to see Table of Contents. 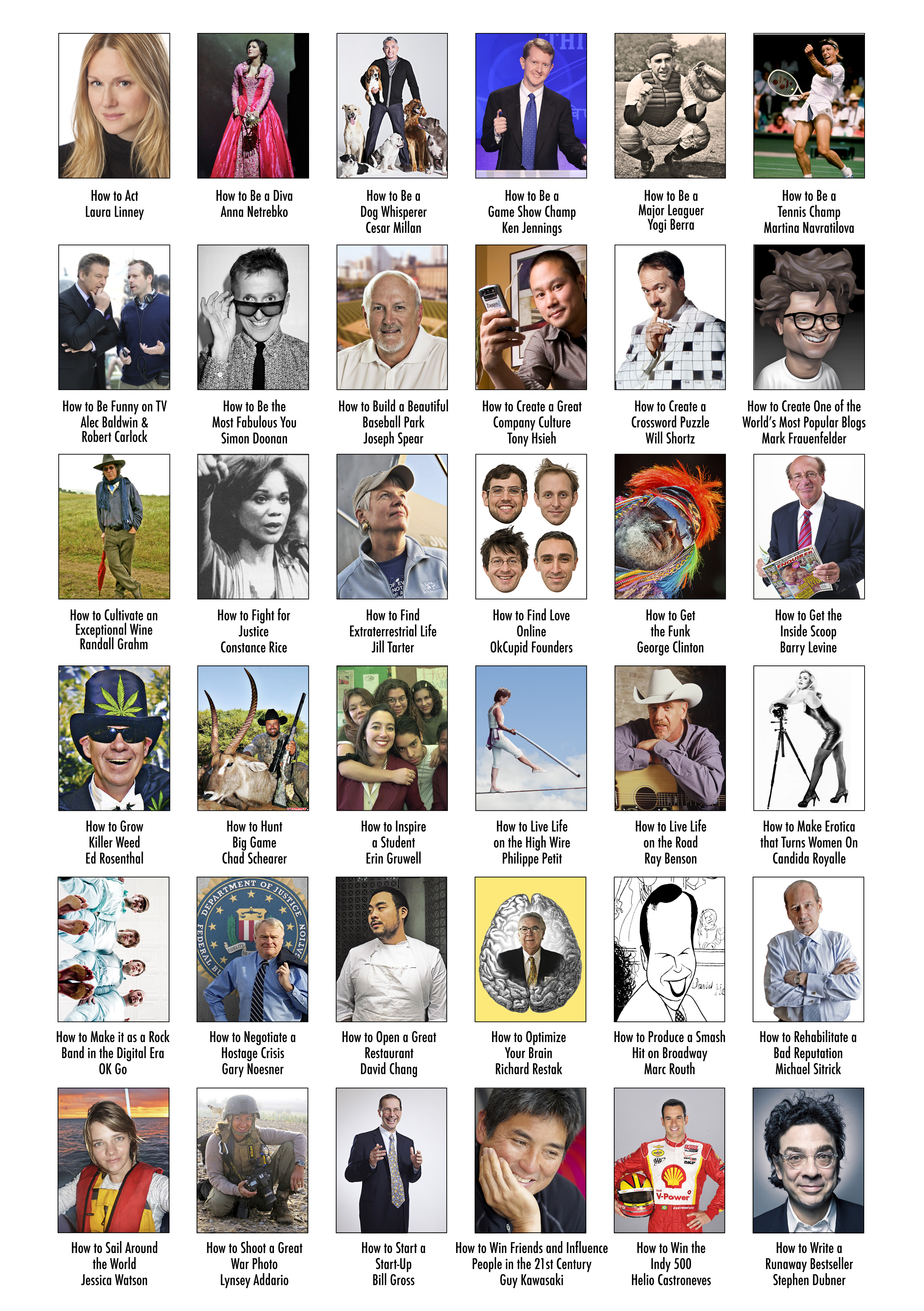 Chapter 1: How to Act

How the daughter of a playwright became one of the most respected actors on TV, stage and screen by learning to love the story.

Chapter 2: How to Be a Diva

How a Russian soprano from a provincial town went from mopping floors to being an opera diva and an international superstar.

Chapter 3: How to Be a Dog Whisperer

How a boy who loved the dogs on his grandfather’s Mexican farm became known to hundreds of millions around the world as the Dog Whisperer.

Chapter 4: How to Be a Game Show Champion

How a young boy’s obsession with the game show Jeopardy! not only led him to become the all-time winning-est game show champion but taught him that he could change his life and do something that he loved every day.

Chapter 5: How to Be a Major Leaguer

How an Italian-American kid from an ethnic neighborhood in St. Louis creatively mangled the English language while winning more World Series titles than any other baseball player in history.

Chapter 6: How to Be a Tennis Champion

How a tennis player totally revamped every aspect of her game in her quest to go from good to great.

How an actor and a writer work together like a “singer and a songwriter” to create one of the funniest shows on TV.

Chapter 8: How to Be the Most Fabulous You

How an English lad parlayed his notoriety as the world’s most famous window dresser into a role as a cultural critic who dispenses his advice to the masses on finding their most fabulous selves.

Chapter 9: How to Build a Beautiful Baseball Park

How an architect who stumbled into sports architecture revolutionized the design of Major League Baseball parks.

Chapter 10: How to Create a Great Company Culture

How a one-time college pizza server turned Zappos online shoe store into a $1 billion business where employees love to come to work.

Chapter 11: How to Create a Mind-Bending Crossword Puzzle

How a boy who loved puzzles came to be the New York Times Crossword Puzzle editor, Puzzle Master on NPR’s Weekend Edition, author of a hundred bestselling puzzle books and the subject of a critically acclaimed documentary.

Chapter 12: How to Create One of the World’s Most Popular Blogs

How a tech head who quit his job to publish a zine about his off-the-wall interests founded one of the world’s most popular blogs.

Chapter 13: How to Cultivate an Exceptional Wine

How a visionary vintner plans to do something with an American wine that has never been done before.

Chapter 14: How to Fight for Justice

How a civil rights lawyer who won case after case had to learn to change herself before she could change Los Angeles.

Chapter 15: How to Find Extraterrestrial Life

How a girl who used to look up at the stars at night came to run the world’s preeminent institute dedicated to answering the ultimate question: “Is anyone out there?”

Chapter 16: How to Find Love Online

How four math nerds from Harvard and their algorithm created one of the hippest online dating sites by making their matches more simpatico.

Chapter 17: How to Get the Funk

How a hairstylist who never played a musical instrument became one of the funkiest people on the planet.

Chapter 18: How to Get the Inside Scoop

How the hard-driving news director of the supermarket tabloid National Enquirer keeps the enquiring minds of the celebrity-starved masses entertained.

Chapter 19: How to Grow Killer Weed

How a boy from the Bronx became the “Guru of Ganja.”

Chapter 20: How to Hunt Big Game

How a fifth-generation hunter who goes hunting with his wife and young boys bags a bull by “playing the wind” and “taking the temperature of the animal.”

Chapter 21: How to Inspire a Student

How an idealistic teacher inspired her class of remedial students to write a bestselling book and become citizens of the world.

Chapter 22: How Live Life on the High Wire

How a French teenager got the idea to walk across the void between the 110-story World Trade Center towers—and did it!

Chapter 23: How to Make Living on the Road Livable

Chapter 24: How to Make Erotica That Turns Women on

Chapter 25: How to Make it as a Rock Band  in the Digital Era

How a rock band posted a video online that became the first intentionally viral video and changed their career forever.

Chapter 26: How to Negotiate a Hostage Crisis

Chapter 27: How to Open a Great Restaurant (and Stay in Business)

How a hotheaded owner of a tiny noodle shop turned his business around and became an international restaurateur.

Chapter 28: How to Optimize Your Brain

How a neuropsychiatrist synthesizes the history of the human mind from Socrates and Salvador Dali to the most recent revolutionary brain research in his 18 books (and counting) on the brain.

Chapter 29: How to Produce a Smash Hit on Broadway

How a child actor who decided he belonged backstage went on to become a producer of some of Broadway’s most critically-acclaimed and successful shows.

Chapter 30: How to Rehabilitate a Bad Reputation

How a Mr. Fix-it to the stars turns around the careers of scandal-scarred celebrities.

Chapter 31: How to Sail Around the World

How an 11-year-old girl got the idea from a book to sail around the world—by herself—and did it five years later.

Chapter 32: How to Shoot a Great War Shot Without Getting Shot

How a five-foot-one woman with no professional training on a mission to document the horrors a war became a celebrated Pulitzer Prize–winning photographer.

Chapter 33: How to Start a Startup

How a businessman with great ideas  got the ultimate idea to create a company whose business was to have ideas.

Chapter 34: How to Win Friends and Influence People (in the Twenty-first Century)

How a business guru got the gospel at Apple and went on to preach what he practices and become the Dale Carnegie of the digital age.

How a Brazilian boy determined to become a racecar driver overcame unscrupulous managers, family bankruptcy and crises of confidence to win the Indy 500 not once but three times.

Chapter 36: How to Write a Runaway Bestseller

How a writer became the author of a bestseller, Freakonomics, by explaining what other people have to say and telling a good story.