Mankind has been gazing up at the stars for hundreds of thousands of years, wondering, “Are we alone?” Astronomer Jill Tarter, one of the world’s leading alien hunters, has put this quest at the center of her life. 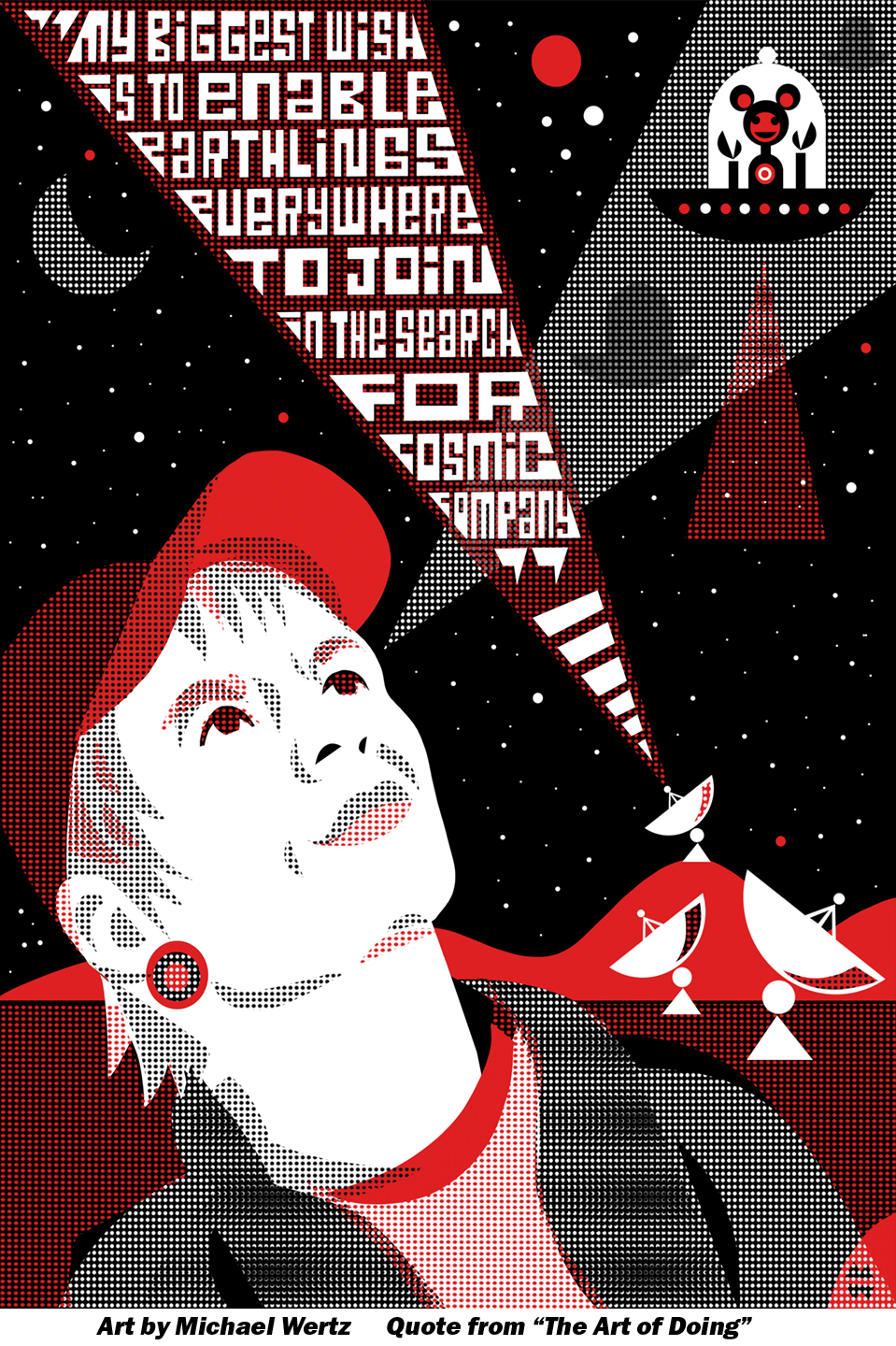 The Art of Doing Artist’s Interpretation project is a collaboration between us and imaginative artists we’ve chosen to depict the superachievers in our book.

Since we think artist Michael Wertz’s work is brilliant, we asked him to create a piece of art about one of our superachievers. Because of Wertz’s love of all things extraterrestrial—from his childhood pillowcase covered in cosmic Peter Max imagery to the Carpenters’ ode to space, “Calling Occupants of Interplanetary Craft”—he jumped at the chance to depict astronomer Jill Tarter, one the world’s most prominent alien hunters. (Chapter 15 in our book on “How to Find Extraterrestrial Life.”)

The term alien hunter might conjure up images of Roswellian conspiracy theorists or UFOlogists, scanning the skies for sleek hovering spaceships and little green men, but astronomer Jill Tarter is far from that. Tarter is a TED prize-winning leader at the SETI Institute (Search for Extraterrestrial Intelligence) where a team of scientists at the Hat Creek Observatory in Northern California operates a powerful telescope array in the world’s most technologically advanced search for signs of life in the universe.

Tarter’s devotion to this search is not just to satisfy her curiosity. She is also an evangelist. She believes that rather than to define ourselves by our differences, whether Christian vs. Muslim, Republican vs. Democrat, the search for intelligent life beyond ourselves reminds us of what binds us together, that all humans are members of the same tribe—earthlings. Tarter told us:

“I hope that if SETI does nothing else it will change the perspective of humans on this planet. That would be one of the most profound endeavors in history.”

SETI Fact: You don’t have to be astronomer to join in the search. SETI has created seti@home, a citizen scientists’ project where individuals can help analyze the data that SETI’s telescope array collects from the heavens

Jill Tarter Fact: Jodie Foster’s character, alien hunter Ellie Arroway in the 1997 movie Contact was inspired by Tarter’s life. In 2011, when SETI was forced to shutdown operations due to lack of funds, Foster, along with many other private donors, raised hundreds of thousands of dollars to keep it going.

“Calling Occupants of Interplanetary Craft”: The Carpenters’ version of the song was actually a cover of the original by the band Klaatu that in turn was inspired by a message from the International Flying Saucer Bureau, which in 1953 sent out a bulletin to all members urging them to participate in World Contact Day, whereby at a predetermined time, they’d collectively send out a telepathic message to visitors from outer space that began, “Calling occupants of interplanetary craft!” The Carpenters’ version spurred another cover, a mash-up, a dub version and of course, what’s a hit song without a version acted out by puppets?