Eugene Hutz, Ukranian frontman of the Gogol Bordello, talks about embracing chaos, setting your own standard, finding a creativity stream that never runs dry and how only boring people get bored. 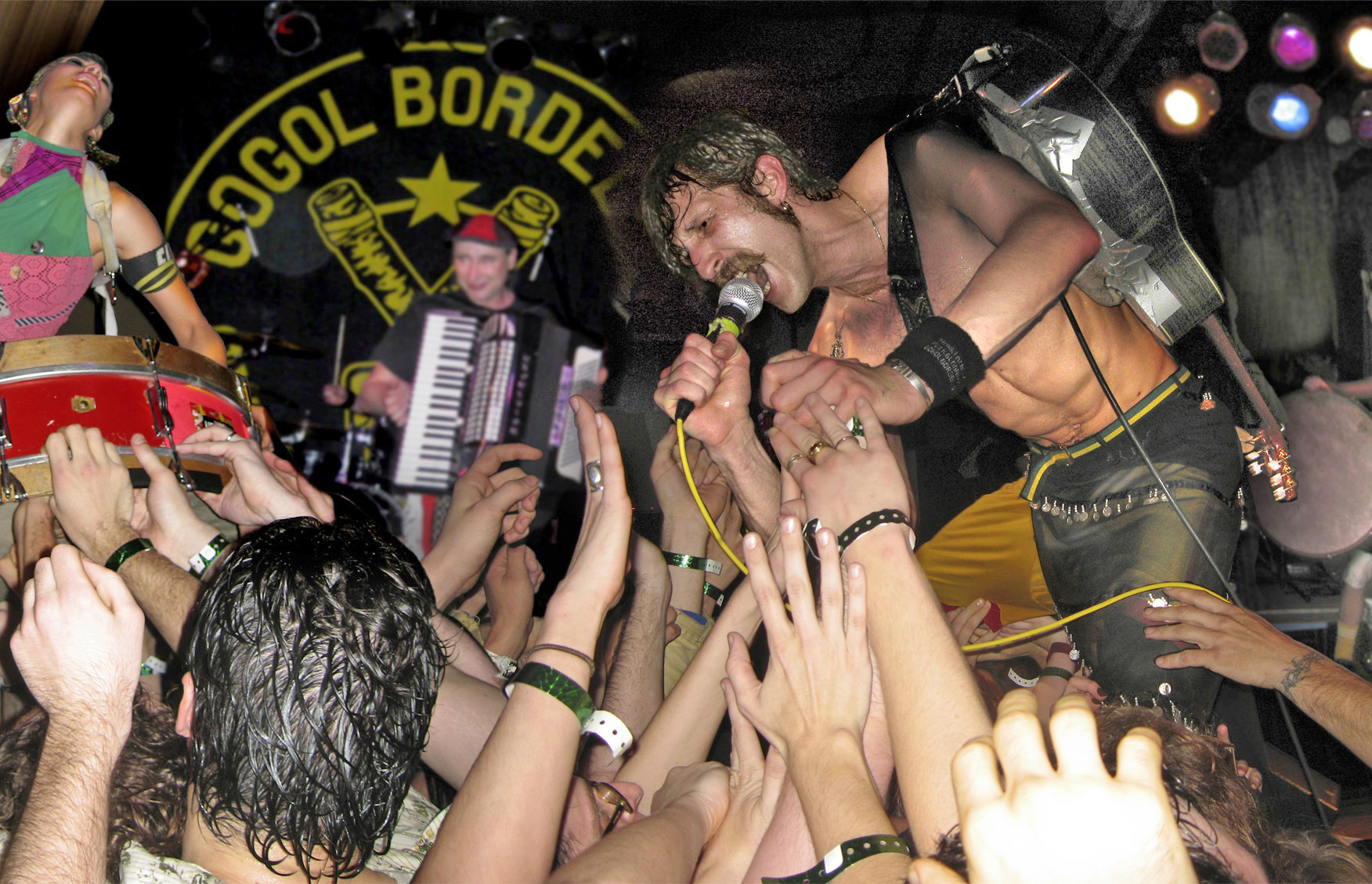 Gogol Bordello puts on some of the most transcendently sweat-drenched, crowd-inciting shows, but how do they keep reinventing themselves after nearly 15 years of non-stop touring all over the world?

We first saw the band Gogol Bordello in 2000 at the National Restaurant and Night Club, a glitzy supper club that caters to Russian immigrants in Brighton Beach. The lead singer and hyperactive Ukranian frontman of the band, Eugene Hutz, wore an upcycled tux jacket over his bare chest, leggings, high tops and floppy rabbit ears as he stalked back and forth across the stage like a madman on amphetamines, walking precariously out over the crowd on top of a hand-held gang plank and shimmying up and down his mike stand, belting out tunes like a Russian born Iggy Pop raised on Berthold Brecht. The songs were melodic mash-ups of Russian and Roma folk tunes bashed out with a punk sensibility, Hutz on acoustic guitar accompanied by horns, electric guitar, drums, an accordion, a mad fiddler sharing the stage with a Romanian belly dancer and two lithe performers in costumes straight out of a Russian Constructivist fashion show who acted out the lyrics as they banged on a bass drum with mallets and clanged oversized marching band cymbals.

What did it all mean? We had no idea. But we were in love.

We saw every New York City concert the band played for the next few years, most of them in small venues where their possessed fans—most of them from Eastern Europe, Russia or Latin America—would hooliganize in the mosh pits, dance on tables and pass Hutz around the crowd as he rode around on top of a bass drum turned on its side. In 2001, Gogol Bordello played late into the night out in the dark in upstate New York down a road called Mink Hollow. There was a full moon. There was a bear. It was our wedding. And when it came time to cut the cake and some of our more genteel family members expressed a preference to do it without the accompaniment of Hutz and his noisy band, Hutz growled into the mike, “I got a song for cuttin’ the fucking cake.”

Gogol Bordello which formed in 1999, has released several genre-defying albums, including Multi Kontra Culti vs. Irony, Gypsy Punks: Underdog World Strike and Trans-Continental Hustle and toured through the world’s concert halls, clubs and festivals putting on the some of the most transcendently sweat-drenched, crowd-inciting shows, from Brazil to Belarus, inspiring the dean of rock critics, Robert Christgau to call them “The world’s most visionary band.” We wanted to know how this seemingly anarchistic rag tag band of immigrant musicians (from the Ukraine, Russia, Israel, Ecuador, Scotland, Ethiopia) conquered the globe. So on the occasion of the release of the band’s sixth album, Pura Vida, we sat down with Eugene Hutz to find out.

Embrace the chaos. Hutz’s childhood in the shadow of the Chernobyl Nuclear reactor disaster and the turmoil of the dying days of the Communist Soviet state might have been more disruptive than most, but what he learned about dealing with chaos could apply to anyone trying to navigate the precariously changing modern world. He told us, “Russia and the Ukraine are stuck between Europe and Asia. And don’t have the benefits of either one. We don’t have any organizational and managerial skills like Western Europe and the States. Nor do we have Asia’s thousands of years of spiritual tradition. We’re pretty chaotic. I dealt with the situation by making friends with the chaos and learning to accept what is already there. Which is not easy. Because we’re born into thinking we constantly have to rearrange things. Trying to constantly create order is a source of suffering. Because how much order can there be? The weather changes every day every fucking day so am I supposed to feel the same every day? Fuck no! A lot of the chaos of the band on the stage is my crusade to bust out of too much order. Perfectionism is a disease.”

Set your own standard. Hutz talked about making a mark for yourself rather than allowing others to do it for you. He told us about the first time this happened for him, “I remember as a kid a miserable 15 kilometer cross-country run that we did every Sunday. There was no coach. Nobody was watching. It was in the woods and I was freezing and I wasn’t dressed properly and we were running with plastic bags on our feet and it was so cold it was like my dick was completely frozen and I thought it would fall off. And as I was running I was thinking, ‘This isn’t a fucking circle in the stadium where I can just get tired, stop running and fuck off. No I’m already 7 kilometers into the woods.’ And everybody started chickening out. Short-cutting, turning around and running back. But something inside me said, ‘I’m gonna to fucking make it to the mark. I’m going to touch the fucking tree.’ I went to the fucking tree and I hit the mark. And I thought, ‘Okay that’s my path right there.’

A mind is a terrible thing to overuse. Hutz, who describes his mind as “very active,” has spent years long-distance running, drumming (his first instrument), reading Schopenhauer, Kierkegaard, Nietzsche and Eastern philosophers, doing martial arts and meditating to gain a deeper understanding of consciousness. He told us, “Your mind is a very powerful tool to get you from A to B, but it’s not where your soul resides. Your mind is just a stomach for your thoughts. No matter what artists say, they don’t create out of [Hutz points to his head] here. Playing music stops the thinking process. The consciousness becomes more engaged. I’m going to go out on limb and say that when Miles Davis played, there was probably not a whole lot of thinking going on. It was just pure connected self.

Find the stream that never runs dry. Although Hutz, like many performers, is protective about breaking down his artistic process (he told us, ‘you might want to get a psychoanalyst to figure that out’), he did let us in on a choice tip about how you can keep the creative juices flowing by always being open to changing the way you work. He told us, “I’ve used many techniques. All of them work to a certain point. I went through a whole phase where I was writing in a room covered in pornography. I covered my whole room with naked women doing crazy shit. I thought to myself, ‘Okay I’m a man. I’m 20 years old and these women can sure add a lot to what I can write.’ And it really worked. It invigorates your brain with extreme levels of hormones that are responsible for very uplifting creative acts. I started touring and that changed the lifestyle a lot. I had to adapt. So, I wrote at night. Kafka wrote at night because he was working in a bank during the fucking day. He had to do it. Screwing around at night decadence worked for a while. But that night stream runs dry. Then, I used the morning energy to write TransContinental Hustle, writing on a tabletop. But I began to see that table writing got to me to the point where I was writing with the mind. So I walked away from it. I was living in Brazil then and I started getting as far away as I could—biking, walking, climbing you name it endless hours of doing tai chi, which unfogs you. The writing became fresh again. Going on an adventure became a new form of writing. Not forcing it at all but just waiting for the glass to fill up and then saying, ‘Okay, I’ll write it down or it will start spilling.’ But not until then. You want to always move forward to the stream that never runs dry.”

Only boring people get bored. We often imagine hyperactive types like Hutz needing constant stimulation to fuel their creativity but it turns out we were wrong. Hutz told us, “I literally don’t understand the concept of boring. I know that it’s out there. I know some people complain of boredom. But I have no idea what’s on their mind when they experience it. Are they are desensitized? Are they are too bombarded? Are they incapable of  connecting to life? Because —wow!—life is actually pretty good. Once I was on a long break for two months and I thought, ‘I’m going to make a really interesting experiment. I’m going to take a week and I’m going to try and get bored and see what happens.’ I didn’t do fucking anything, which can have a negative connotation for some people. But I did not feel negative. The more still I became the more I felt my gasoline tank was filling up. And I didn’t need any interaction. People always say ‘I’m bored,’ ‘I need to read something,’ ‘I need to watch TV!’ Fuck no!”

It’s not about getting there but about having a Bordello kind of time along the way. With the grind it takes to form a band, keep it together and then slog your way to enough public acclaim to make a living, it might seem like the payoff would be gold records and Grammys. But Hutz told us, “When bands get popular a lot of people lose their shit and believe everything that they read about themselves, fifty percent of which is not true. No matter how romantic you are being involved in the music industry or any industry will take its mark. But it’s not really about, ‘Let’s get there, let’s get there, let’s get there.’ We’re in this band because of a love of the lifestyle. It’s just great to be on tour. And it’s great to play gigs. It’s great to bullshit after the show. It’s great to go get lost somewhere and wake up and say ‘I don’t know where the fuck I am.’  Thomas Gobena, bass player, who joined the interview, added, “It’s doesn’t matter whether we’re playing in front of 10 or 2 or 3000 people. We’re on stage playing this music that we love. And we’re completely consumed by. We do all sorts of things to prepare for the stage show, but once you start playing, it’s on.”