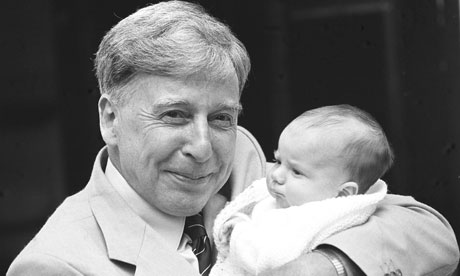 The history of every innovation is unique with its own idiosyncratic quirks, characters, and defining cultural moments. But when we look back on ideas that were mere visions before they were embraced by the public, such as IVF, it can be helpful to see how an innovator like Edwards (who died earlier this month) pulled it off. Here are some lessons any entrepreneur or visionary can borrow from Edwards’s quest:

Don’t let the haters take you down. Most radical new ideas are met with legions of unbelievers before they become part of the fabric of our lives. Just ask Galileo or Vincent Van Gogh. As Edwards’s attempts at in vitro fertilization came to light, instead of being hailed as a visionary, fellow scientists asserted that his experiments would have “horrifying consequences.” James Watson, Nobel Prize-winning pioneer of DNA, charged him with risking infanticide (Edwards would go on to win the Nobel Prize himself in 2010). Representatives of the Catholic church accused him of murder. And the press had a field day with sensational headlines such as The Sun’s “BAN THE TEST TUBE BABY.”

Although very cautious about the ethical questions raised by his experiments, Edwards wasn’t about to give in to his critics and stop his work. If left unanswered, his critics may have swayed public opinion and contributed to legislation that would have limited his research. So Edwards spoke out. He appeared at conferences, lectured, and gave frequent interviews about the possibilities of finding a way to allow infertile women to bear children of their own.

Get creative about the cash. Many innovations never see the light of day for lack of funding. In hindsight, the idea of developing reproductive technology to help infertile couples seems like a no-brainer. Why wouldn’t the world’s great universities, research centers, and federal governments allot resources to solve the problem? But at the time, Edwards was left to fend for himself. For years he and his team worked for free in their spare time. Eventually the project reached a point in which they needed a sterile lab and more advanced equipment. Edwards applied to the Medical Research Council in London for funding. They refused and leaked the rejection to the national press, which gave Edwards’s critics ammunition.

In order to continue, Edwards had to get creative. He wrangled space from a small, out-of-the-way hospital with one operating area and three tiny rooms. With the help of generous individuals (mostly American) he was able to purchase the equipment and convert the rooms. By watching their expenses and not taking wages, they had just enough money to keep doing their research until they succeeded.

Build a community. Few great innovations are conceived of and executed by one man or woman alone. Edwards would have never been able to achieve his goal without the help of others. Since he was a scientist and not a medical doctor, he needed a partner.

Patrick Steptoe was a gynecologist disappointed at not having earned a position at a more prestigious hospital. But he shared Edwards’s passion to help infertile women, and as a highly skilled surgeon and a pioneer of laparoscopy (surgery through a small incision with a thin tube), he was the perfect partner. It was Steptoe who removed eggs from infertile women’s wombs and returned them after fertilization.

Steptoe and Edwards need to gain the trust of the very people they aimed to help–infertile women. As Edwards wrote, these women were “willing to undergo many trials in the hopes of one day having their own babies.” This community of women, he wrote, “cooperated in a project that was in its early stumbling stages.” In fact, he added, they had to be “restrained from volunteering too much.”

It was their plaintive letters and fierce encouragement that kept Edwards going through the dark times.

Take the problem apart. We sometimes imagine an inventor’s eureka moment after which he or she gathers materials, dashes into the garage and–voila!–builds the thing. But the execution of most innovations requires solving not just one big problem, but a series of smaller problems, one after another.

In Edwards’s case, each one of his reproductive breakthroughs had to be made before he could advance to the next stage. He had to crack seemingly unsolvable problems: Collecting an egg from the womb, keeping it alive in a culture until it matured, fertilizing that egg with spermatozoa and allowing it to mature. When the fertilized egg–a blastocyst–was ready to be transferred back in the womb, Edwards and Steptoe had to master the transfer and work out every detail so that the pregnancy would take. These cutting-edge technologies took years to sort out and required Edwards to cycle through multiple trial-and-error experiments and frustrating dead ends before he found the combinations and protocols that worked.

Stay the course. How many of us are capable of devoting huge swaths of our lives to projects that the world doesn’t believe in? How many of us are ready to quit our jobs or spend all of our free time on endeavors that have no guarantee of success? Edwards did most of his work in virtual seclusion. He worked in a tiny, windowless laboratory that was a converted linen closet in a small, backwater hospital. The hospital was hundreds of miles from his home down twisty rural roads. Repeatedly, after returning home from a full day of work, Edwards would have to drop everything and leave his family again. He endured multiple failures in pursuit of his goal. He often despaired and thought of quitting.

He and Steptoe had implanted 100 fertilized eggs in the wombs of infertile women, and not one resulted in a viable pregnancy. Time was running out. Edwards’ partner Steptoe was soon to retire, after which they’d would lose the use of their facilities.

Edwards had yet another epiphany. With no way of knowing if it would work, he wondered what would happen if he simply allowed an egg to ripen in the womb (instead of outside of it) before removing the egg for fertilization. This required precise timing to remove the egg at the perfect moment.

As the clock ticked down, Edwards and his team tried this on one of the last of their volunteers, Lesley Brown, who had been trying to get pregnant for nine years.

On July 25, 1978, this volunteer gave birth to a healthy baby girl, Louise Brown–the first child born of in vitro fertilization. Since then, more than 4 million babies have been conceived this way.