How a high school teacher transformed her students into best-selling authors by becoming a student of her students. 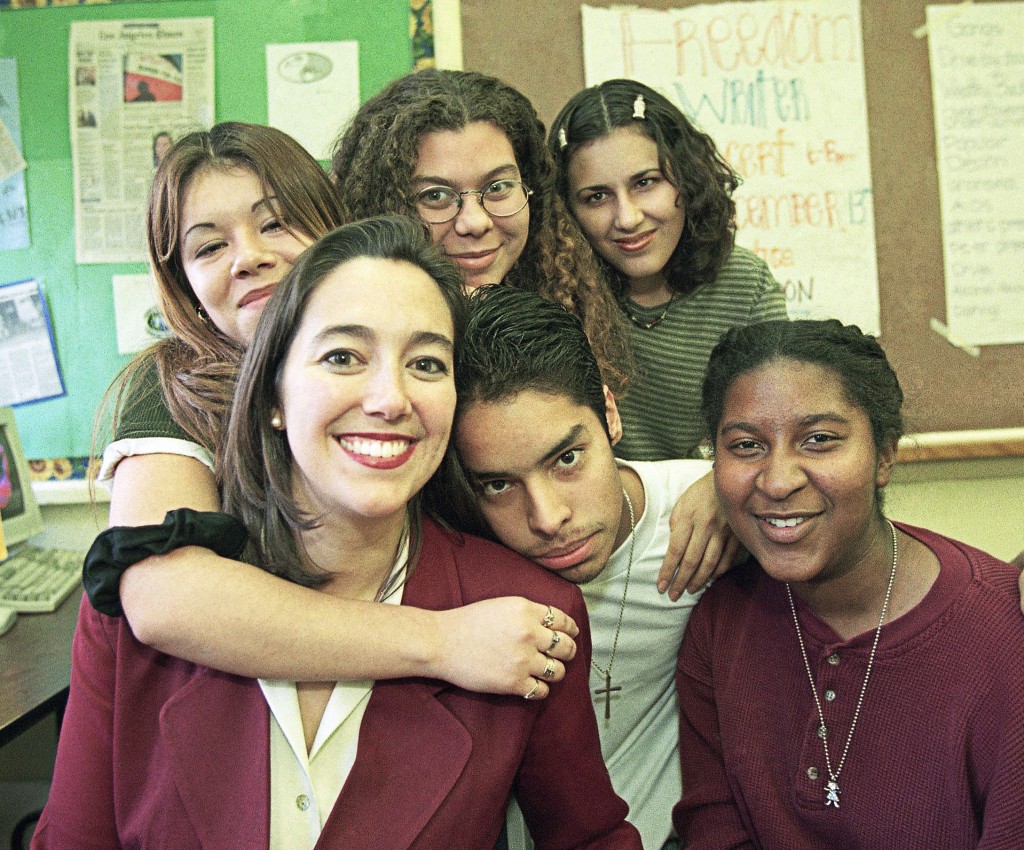 When Erin Gruwell jettisoned her entire curriculum and replaced it with creative new teaching techniques, she inspired her students to start journaling about their lives, which became the best-selling “Freedom Writers Diaries.”

Along with education advocates Geoffrey Canada and Ken Robinson, Erin Gruwell and her teaching foundation, The Freedom Writers, are at the forefront of some of the most visionary thinking about education.

But Gruwell’s success began with a crushing failure.

In the mid-1990s as an idealistic young teaching novice, Gruwell stepped into Room 203 at Wilson High School in Long Beach, California, with dreams of teaching her at-risk students Homer’s Odyssey and Shakespeare’s sonnets. Her students, whose lives were plagued by poverty and violence, could not have cared less. “On my first day, in my pearls and polka dot dress, I thought I was going to change the world. But I didn’t have a clue,” said Gruwell. “My students checked their pagers, reapplied their eyeliner, and laid down their heads on their desks and took naps. I dodged a paper airplane made out of my syllabus and tried to make myself heard over the ‘Yo, Mama’ jokes.” As the bell rang, she heard one student say, “I give her five days.”

It couldn’t have gone any worse, until it did. But instead of accepting a fate as a disrespected, ineffective teacher, Gruwell had a failure-inspired epiphany.

“I threw out everything I’d been taught,” she said. “I had to become a student of my students.”

With innovative strategies, Gruwell fought against a model of education that was not educating in a school system that made it almost impossible for teachers to teach. The hard lessons that Gruwell learned and the brilliant innovations that she developed could be applied to any business, nonprofit or academic institution.

One day as Gruwell faced a roomful of hostile teens that she was unable to reach, let alone control, she intercepted a racist caricature of a student that was being passed around. The caricature reminded her of anti-Semitic images of Jews in Nazi propaganda. Angry when she found out that her students had never heard of the Holocaust, she snapped and then asked, “How many of you have ever been shot?” Her students pulled up their shirts and pants legs, showing off their scars–bullet wounds and stitches–and they talked about their lives, telling harrowing stories of gang-related violence. As they talked, Gruwell listened. She listened not just to validate them, but to gain a deeper of understanding of their needs. And as she listened, her anger turned to empathy. For the first time, she saw their lives from their perspective. “It became painfully obvious,” said Gruwell, “that every theory I had learned in my graduate courses paled in comparison to the raw lessons I would learn in my urban classroom.” Soon afterward, she gave her students stories of teens, who like themselves were growing up in troubled times, Zlata’s Diary: A Child’s Life in Wartime Sarajevo, A Diary of Ann Frank, Romeo and Juliette. Gruwell–like anyone trying to learn about their customers, coworkers or team members–realized, as she said, “I had to learn to speak their language instead of expecting them to speak mine.”

Make your classroom (or office) a place where people feel they belong.

Gruwell understood the importance of creating a supportive emotional and physical space so that her students could thrive. Anyone who has logged time in a depressing corporate office or toxic work environment–or mind-numbing classroom–knows how that can sap your energy and kill off your inspiration. “I was going to show my kids that no matter what happened with their parents, parole officers and other teachers, I wouldn’t give up on them,” said Gruwell. “I let them know it matters to me that you come to class, it matters to me that you try, it matters to me when you succeed. This room is a place you can come to before or after school. We took photos and covered the walls with snapshots of every single student. The kids loved that. We turned our crazy, messy dilapidated classroom into a home. The message was clear, ‘You belong here.’ ”

Help the members of your team grow.

Every organization has its specific goals, but to accomplish those goals over time members of the team have to step up and grow into new roles. In Gruwell’s case, one of the keys was to help her students find their own voice. “Every kid has a story,” she said. “Hoping they’d been inspired by the examples of Anne Frank and other teens who had turned negative experiences into something positive by writing about them, I handed out notebooks for my students to journal about their lives. There was some initial resistance. But then the stories poured out of them, full of anger and sadness. They wrote about sexual abuse, gang violence, hurt and hate. Many of them were stories they hadn’t told anyone. It wasn’t just the writing, but hearing and editing each other’s stories was cathartic for my students, really a profound healing process. Once they began to write their own stories, it opened them up to the possibility of being able to rewrite their endings.” Gruwell found that offering opportunities for individual growth led to great things. No one, least of all the students, would have ever believed that their brutally honest stories would go on to become the New York Times best seller, and a motion picture, The Freedom Writers Diary.

Fight for the people in your organization.

In some organizations, a manager fighting for the people on their staff is an alien concept. But when the change-resistant and often nihilistic educational bureaucracy blocked Gruwell from helping her students, she went to battle for them. “When I went to get Catcher in the Rye for my students from the English department storeroom, the co-chair [of the department] took the book out of my hands and said, ‘Your students are too stupid to read it.’ I thought, ‘I’ll show you!’ I asked my dad for a cash advance on my Christmas present to buy every student a copy. They were shocked to get brand-new books.” Another time, when a field trip to Washington, D.C. that Gruwell had organized to meet the Secretary of Education was vetoed by the school’s principal, Gruwell vowed not to let her kids be denied the experience. And they weren’t. “I took the risk of going over [the principal’s] head to the superintendent of the entire school system.” Fighting for the members of your team isn’t just about surmounting obstacles. Advocacy for others can also inspire in them trust, loyalty, and a greater commitment to the shared cause. “Realizing I’d gone out on a limb for them,” said Gruwell, “my students worked that much harder.”

Being a teacher–or an entrepreneur or freelancer–can be isolating. “You go in your room, you shut the door, you’re by yourself,” said Gruwell. “You may battle condescending administrators, disgruntled parents, long hours of afterschool work. You try things that fall flat. You work two, sometimes three jobs to make ends meet. Disillusionment is totally normal. Some teachers feel that if they ask for emotional help, they’re a failure. But teaching is a team sport.” Whatever your vocation, as with Gruwell, if you make allies (whether within your organization or outside of it) who understand what you’re trying to do, they will “boost you up when you’re down.”

Expose your team to the world.

Although it might not be practical to send your staff on an all-expenses-paid vacation to Mongolia, enabling some mental stimulation for those who are cooped up for long hours in tiny offices or stationed within a sea of cubicles might yield a happier, smarter, and more productive workforce. Gruwell believed that her students could learn some of the most valuable life lessons outside of the classroom. “We went places where the students could experience the lessons of fighting against intolerance firsthand,” she said. “We pushed hard for it and traveled to Auschwitz. We traveled to Sarajevo. Eventually, the kids were so inspired that they became instrumental in organizing community events to field trips themselves. That’s the beauty of education, kids taking lessons out of the classroom and back into their own world where they can positively affect their family, their friends, and their greater community.”

If you have a great idea, spread it.

Gruwell, like many other innovators with a vision, dreamed of scaling her idea. “Seeing all 150 of my students graduate, many the first in their families to do so, made me wonder if the teaching techniques I’d been instinctively developing could be replicated in other classrooms,” said Gruwell. “Through the Freedom Writers Foundation, with many of my former students, we developed a program that emulates and universalizes the lessons we learned in Room 203 to inspire the youth of tomorrow, regardless of age, race, or socio-economic background, to make a difference in their communities and the world.”