At 21 years old, Brandon Stanton–the creative force behind the immensely popular photo blog Humans of New York–had flunked out of college, was kicked out of his parent’s home, was doing drugs, working at a dead end job at Applebee’s and living in his grandparent’s basement in Atlanta, Georgia. He was also convinced that he was going to write a bestseller and he wasn’t wrong.

When Brandon Stanton’s photo project of the Big Apple’s interesting characters grew beyond his original vision, he followed it straight to bestsellerdom.

[Our original article on Brandon Stanton ran in Fast Company last Fall. Recently Brandon was at SXSW for a book signing for his best-selling book, Humans of New York, and a talk on everything he’s learned about audience building, crying alone in his bedroom, the magic of social media and the difficulties of standing out in a world where everyone has something to “like” and “share.” Brandon himself says that he thinks he “has some special insight into building a large following around a new idea. But may have just gotten lucky, and could be completely full of shit…”]

At 21 years old, Brandon Stanton—the creative force behind the immensely popular photo blog Humans of New York—had flunked out of college (earning a combined score of zero on his five courses). Kicked out of his parent’s home, he was doing drugs, working at a dead end job at Applebee’s and living in his grandparent’s basement in Atlanta, Georgia. He was also convinced that he was going to write a bestseller.

Stanton described the unanimous reaction of his friends and family at the time: “They all said, ‘What the hell is wrong with Brandon? What a loser!'”

But now, not even a decade later, Stanton, 29, has eventually achieved his dream with over three million blog followers and a #1 bestseller. 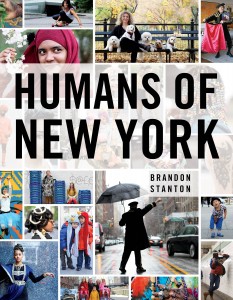 Stanton’s long, strange trip to bestsellerdom has been an improvisatory, ever-evolving quest to express himself. “I’ve always felt like an artist because I recognize a lot of beauty,” Stanton said. “Back in my past I did have faith in myself, but it was a lot more irrational. If you look at every great artist or person who’s done something great you will see that they’ve had friends behind their back whispering that this guy’s delusional or a meglomanaic. Because in order to do great things you need to believe that you can do it before there is any evidence supporting your beliefs.”

Having abandoned college, Stanton took control of his own education, giving himself an edict to read 100 pages everyday, nonfiction or literary fiction, regardless of anything else that was going on his life. A quota-driven guy, Stanton also assigned himself the task of reading a biography of every single one of the 43 U.S. Presidents, but he found that not all self-assignments are created equal. “I got up to Martin Van Buren and was like, ‘Some of these guys just aren’t that interesting.’ So I quit,” he said. “But I kept up with the reading at that pace for six or seven years.”

Flash ahead to a bond-trading job in Chicago. After a fluke run of luck gambling on football games, Stanton earned a $3,500 stake–which he promptly invested in Canon EOS 7D camera with a 50mm 1.2 lens. And to relive the stress of his job Stanton, spent his spare time on the weekends (when he wasn’t reading his daily quota of 100 pages), taking photographs on the street. “I saw a lot of beautiful things,” he said, “but I never really had the technical skills to draw or to paint or to portray them. When I got the camera I thought ‘Oh here is a way to really frame my perspective of the world.’” Stanton developed what he called a “genuine love/obsession for taking pictures on the street.”

Stanton had the camera but he lost his job. He traveled to different cites in the northeast, posting his street pictures to his personal Facebook page. When he visited New York City in 2010, he named the Facebook photo album, “Humans of New York.” And then he never left. “I guess the leap for me was saying ‘I’m gonna move to New York with six months of photography experience.’” 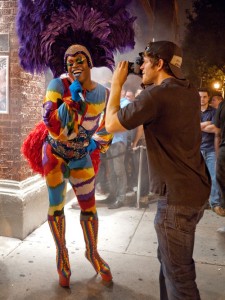 Stanton’s concept came to him in stages. “It was a series of tiny evolutions that occurred over a long period of time,” he said, “It started with taking thousands of pictures of things out on the street like fire hydrants and street signs. Then I started taking candid pictures of people.” Stanton set a goal to create a photographic census of New York City. “I was going to take 10,000 portraits of people in New York and plot them on a map where you could click on any neighborhood and look at the faces of people who lived there,” said Stanton. He was taking 10 to 40 photos a day, but nobody came to his website. When he observed that a huge audience was viewing the few portraits he posted every day to Facebook and other social media, he shifted focus and created a blog for the photos. He began to include short captions with the portraits based on brief interviews with his subjects. The text evolved into in-depth storytelling–stripped-down evocative quotes, quips, and bits of conversation–that could have been lifted from the pages of Raymond Carver or the stand-up routines of Louis CK.

“My approach is escalating commitment,” says Stanton, who asks his subjects for permission to photograph them, snaps a photo, and then explains to them about the blog. If they agree he goes for a more candid shots as he engages in a conversation in which he tries to find out something unique about the person. “Normally that takes the form of an anecdote or a story,” said Stanton. “I have a very short amount of time, so I always start with very broad question. ‘What is your greatest struggle right now?’ or ‘Give me one piece of advice.’

“Usually the answer is very broad. Something like—‘Seize the day’ or ‘Always be optimistic.’ But those answers reveal that there’s a life experience underpinning them. A lot of these kinds of stories revolve around an emotion, being really sad, happy or afraid. I even find a lot of advice comes from regret. So I’ll ask someone to identify the times in their lives where they’ve felt those emotions the strongest. And usually one of these questions hits on something deeply personal and unique. I don’t need to go ocean deep with everybody. I try to mix it up,” he says. “I’m looking for that one unique thing that people say and sometimes it’s the first thing they say and sometimes it takes ten minutes. But when I hear it I know it and the interview is done.”

When it comes to distilling what Stanton’s subjects have told him, his 100-pages-a-day reading regimen paid off. He tips his hat to one of his literary heroes. “Ernest Hemingway always talks about the importance of cutting things out,” said Stanton, “It takes a lot of strength to edit out things that are good and leave only what is essential.”

With Humans of New York’s 1.5 million passionate Facebook fans (whose comments border on reverence—‘Thank you for giving us daily sustenance’—to amazement, ‘I don’t think I’ve seen anything cooler in my life’), and with most posts getting tens of thousands of likes, Stanton’s compelling art project has achieved what would be a marketer’s dream, virality, engagement and stickiness. But Stanton says, “I’m not in it for monetary reasons.” He talked about the freedom he’s achieved by being compensated to do what ever he wants—all day. “Going out and photographing and collecting material for the blog is what I want to be doing,” he says. “It’s what I enjoy doing. It’s my passion.” His goals are simple: “I want to get as good at my work as I can and distribute that work, share it, as far as possible.”

And Staton’s one piece of advice? “I tell everyone a quote I once heard, ‘Don’t wait for perfect.’ There are so many people, my friends included that are just waiting until they have that perfect idea to go out there and do something great. And what I always say is that Humans of New York emerged from the work, it emerged from the process, it emerged from tinkering, so don’t wait until you got everything figured out to begin something. Just begin something and have faith in yourself to figure it out as you go along.”

This story first appeared in Fast Company. You can find other stories of ours there.