How a crash-test engineer with no business experience or knowledge of the toy industry turned a plastic device and a bag of rubber bands into Rainbow Loom, the super-hot kids’ craze and a multimillion-dollar business. 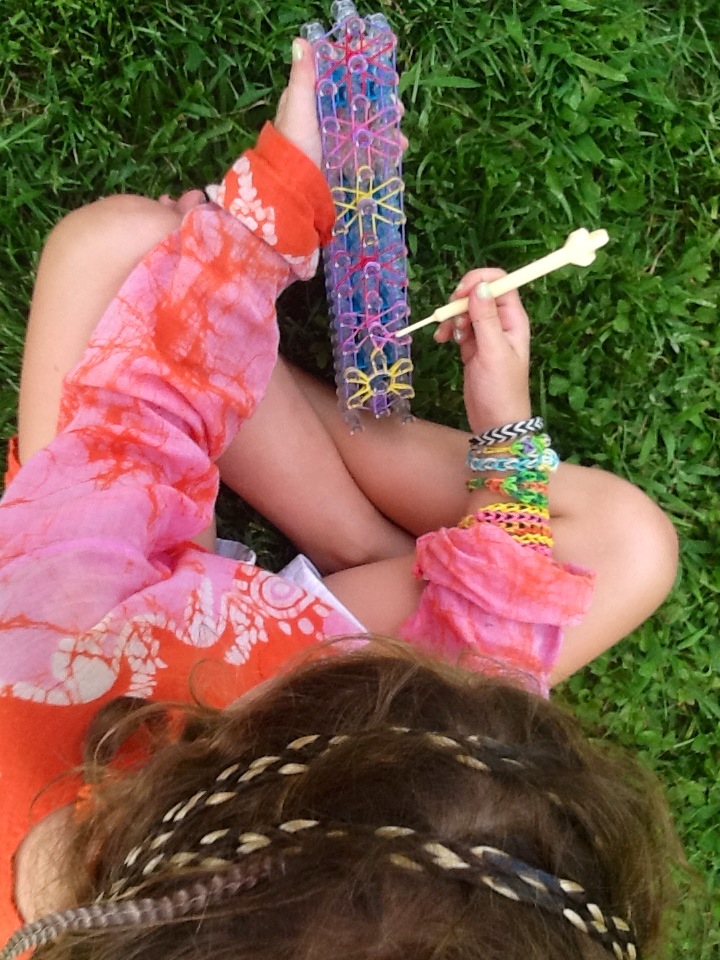 How did a crash-test engineer with no business experience or knowledge of the toy industry turn a plastic device and a bag of rubber bands into Rainbow Loom, the super-hot kids’ craze and a multimillion-dollar business?

Choon Ng, a Malaysian immigrant, wasn’t even thinking about entering the toy market. He simply wanted to share the experience of making bracelets out of rubber bands with his daughters. But his fingers were too big.

Ng, who was employed as a crash-safety engineer for Nissan, went out to his garage workshop and made a device by pressing pushpins into a block of wood. With the aid of a hook, he could then make the bracelets. But when he showed his daughters the bracelets, they didn’t see the purpose of using of a device to make the same bracelets they could create by hand.

So Ng went back to the workshop. He rejiggered the contraption by creating three rows of pushpins. By wrapping rubber bands around the pushpins in geometric patters and then pulling them off, he was able to create more elaborate rubber-band bracelets than his daughters could make by hand. “I thought, ‘Oh my God, look at this. I just discovered a new craft right in front of me,’” Ng said.

Finally the engineer had accomplished the monumental feat of impressing his tween daughters. Ng, his daughters, and his wife become obsessed with the shared experience of designing and making the bracelets. Ng would stay up until 2 or 3 in the morning, drafting out one new geometric arrangement after another and then weaving the rubber-band bracelets on the device.

“It started as a fun project, making really fancy bracelets for friends and neighborhoods kids that they could give away at school to their friends,” Ng told us. But the bracelet’s popularity inspired Ng’s older daughter, then 12, to tell him, “Hey, Dad, maybe you can make something out of this?”

Ng thought she might be right, but the family had bought a home at the top of the housing bubble in 2005 and was financially strapped. They went ahead anyway and invested their entire $10,000 nest egg into the business. Ng refined the device and patented it as the Brunnian link-making device and kit, named in honor of Hermann Brunn, the 19th-century mathematician who was the first to study convex geometry. “With only $10,000 to go for it, I told myself, ‘I cannot mess up,’” said Ng. “There was no room for error.”

Ng’s dream was to sell at Walmart, Target and Toys R Us, but he had to start somewhere. He went to the local mall and walked to the kiosks. But when he pitched the kit (which consists of the plastic loom and a 600 multi-colored rubber bands, enough for 24 bracelets), storeowners were confused by the device. They had no time for Ng’s explanations or demonstrations from his daughters. Ng describes this time, about three years ago, as a particularly low point. “Each rejection was very disappointing and very hurtful,” he said. Despite all his efforts, only three stores were willing to carry the device.

He began to sell the kit online and went the way of Justin Bieber, creating a YouTube channel. He filmed a series of DIY step-by-step tutorials of his daughters demonstrating dozens of patterns–the Honeycomb, the Twistzy Witzy, and the Double-Forward Rhombus—that could be woven on the loom.

Over the next year, he saw an increase in online sales from $100 a month to $1,000 a month, but Ng wasn’t yet reaching the masses.

What happened next is every entrepreneur’s dream. Someone came along and became what business guru Guy Kawasaki describes as an “evangelist,” a person who works with you and aligns him or herself with your cause. Enter Cindy O’Hara, co-owner of two Learning Express store franchises (a nationwide specialty toy store) in the suburbs of Atlanta, who had no idea herself of what a craze Rainbow Loom would become when she ordered a few dozen in the summer of 2012.

O’Hara applied the same principle as Ng: Sell the experience to sell the product. “At first, me and my staff would pull aside tween girls, and ask, ‘Hey would you like to learn to make a bracelet? It can be yours,’” O’Hara told us. “It took a few minutes and we’d pull it off the loom and they’d turn to their mom with that look like, ‘Oh, can I have it?’ And for $14.99, how are you going to say no? And then she’d go home and maybe her next door neighbor would come over and learn about it.” O’Hara and her staff spread the word to their customers about Ngs’ daughters’ tutorials on YouTube, and the kids began to watch and then devise patterns of their own. Recognizing their hunger for more looming skills, O’Hara offered free Rainbow Loom classes at the stores. The momentum built.

O’Hara’s description of the Rainbow Loom experience borders on the ecstatic. She described it as a boon to creativity, focus, fine motor skills, and patience, an activity that knits kids into a social community and promotes generosity because so many kids give away many of the bracelets they make. To O’Hara’s surprise, the interest in the toy spanned gender and age lines. Boys were sucked in and parents and grandparents, thrilled to get their kids off electronic devices, bought the Rainbow Loom kit to make bracelets with their families or in some cases, just for themselves.

Two weeks after she bought her first Rainbow Loom kits, O’Hara placed a $10,000 order. Back in Michigan, the Ngs stared at the order on the computer screen in shock. Ng told us that at that moment he thought, “If we can repeat this in all of the stores in the United States, oh my God, this is going to be big.”

And that is just what happened.

Word of the Rainbow Loom spread through the Learning Express franchise network. It caught on in South Florida, North Carolina, and moved up the East Coast. In many areas, the looms and replacement rubber bands sold out so fast that they were impossible to buy.

Some of the bigger stores finally caught on. The kit is now selling at Michaels Stores, an arts and craft retailer with over 1,100 locations in the U.S. and Canada. “It’s selling 10 times faster than the Michaels’ previous kids’ best seller,” said Philo Pappas, executive vice president of category management at Michaels Stores Inc.

“Every basement inventor has the fantasy that his invention will go big,” admits Ng, who quit his day job at Nissan to run his company, full-time, and has now sold over a million Rainbow Looms.

Someone like Ng, with no knowledge of the industry and a mere $10,000 investment, is at a huge disadvantage trying to compete against the Hasbros and Mattels and other Goliaths of the toy industry. Since Ng had no business experience and no business plan, it may seem that just about anything could sink his venture. But what this amateur inventor had was an engineer’s sensibility that he applied to every problem he faced.

Ng told us that he would try everything, listen to everybody and learn from every mistake, believing that even if he didn’t know how to do something, eventually he’d figure it out by trial and error. Acknowledging that he was in “uncharted territory,” Ng said, “Being an engineer I was more open to trying different things. Don’t give up. Try all options. Learn as you go. Push as many buttons as possible, one of them will work.”

In fact, Ng said that the biggest lesson he has learned as a new business owner is to practice something common at Nissan: the lessons learned system. When something goes wrong, you do a step-by-step critical analysis. Trace the problem all the way back by asking why did the problem happen, and why did the cause of that problem happen and so on and so on until you find the root cause. And then figure out how to fix it so that it doesn’t happen again. Ng applied this practice to the loom invention (he redesigned it 28 times), the manufacturing, quality control, e-commerce, videography, marketing, advertising, packaging, shipping, customer relations, team building, even the name “Rainbow Loom,” which he crowdsourced with his family, friends, and neighbors. Every day, Ng along with his team identifies, analyzes and fixes the problems of the previous day.

The holy grail of entrepreneurs, marketers, and advertisers is to create an interest in a behavior that will become so intense and widespread that it will drive sales of a product or service, in short, engineer a fad. And, hopefully, one that lasts. Ng’s original motivation was not to create a fad. It was simply to share the experience of making rubber band bracelets with his daughters. But when he saw that this experience could “deliver this kind of good fun,” he realized that it was a good business model.

And would he accept any of the deals that have come from large corporations offering to buy Rainbow Loom? “I’m going to say, ‘no’ for now,” Ng told us. “I’m having too much fun.”