As a professional soccer player he was mediocre, as a coach he had only middling success, so how did Joachim Low get his German National team to perform above all the rest? 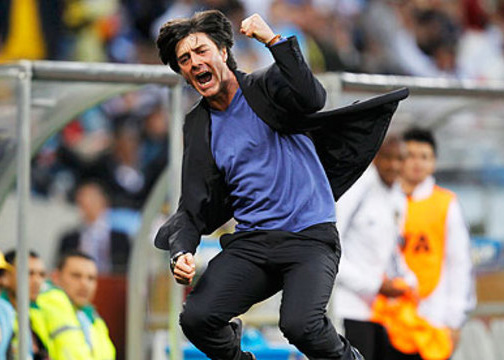 Joachim Low, coach of the winning German men’s soccer team, knows a few things about leading a team for a high-stakes performance.

Joachim Low was a mediocre professional soccer player. As a coach he had only middling success. When he was promoted from assistant to head coach of the German National Team in 2006 he followed in the footsteps of the much-revered coach Jurgen Klinsmann.

Low was a tactical mastermind. As Klinsmann’s chief game strategist and as head coach himself, Low had ditched the static and defensive style of the German team and replaced it with a relentless fluid style of attacking football. The German team’s success raised the collective hopes of the nation, but they always lost the critical games. After a disappointing loss to Spain in the semi-finals in the 2010 World Cup, Low was reviled in the German press. It became a national sport to question Low’s ability to bring home the cup.

In a pre-tournament poll, Germans had so little faith in Low’s leadership that only 6% of the country expected the team to win the 2014 World Cup. But apparently Low knew a thing or two about beating the competition because in front of a billion viewers of the final game, Low proved 94% of his countrymen wrong.

So what can we learn about competing from this footballing philosopher?

Keep one step ahead of your rivals

Even if you have a wildly successful strategy your competitors will eventually figure out how to respond. Low made a splash with his counterattacking style of soccer. In the 2010 World Cup, Germany’s opponents were shocked. But when they adjusted to it, Low knew that he, too, would have to change. “They all played deeper against us. They knew what we are about,” said Low according to the Guardian.

Although Low never abandoned the fast counterattacking transitions, he became more flexible. For each game he developed a strategy tailored to his competition—after which he moved on to what one sports journalist called Low’s “precision-engineered plan” for the next team.  Low will change his team’s formation, switch players’ positions, reconfigure the tempo of a game and even use mind games to psych out his rivals. Just ask Brazil.

Low knew that one of the reasons no European team had ever won a World Cup hosted in South America or Mexico was that even a powerhouse European team might be unprepared for the physical demands of playing in a tropical climate. Since the 2014 World Cup was held in Brazil’s hot and humid climate, Low was aware that Germany’s typical focus on ball possession would “devour energy.” Instead of trying to macho his team through the tropical climate, Low advised his players to be patient, to conserve energy so they could retain their stamina to the very last match.

“You could see at the end that Argentina was getting more and more tired,” Low told reporters in a press conference after the final match. As Argentina’s strength flagged, Low expertly substituted fresh players. In the last two minutes of regular playtime Low sent in 22-year-old Mario Gotze, who had been on the field barely a third of the total 690 minutes the German team played in the World Cup. Gotze looked as if he’d had just strolled out of a spa. 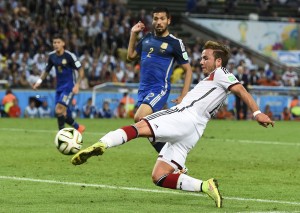 When he received a chest-high pass from another substitute player, Gotze calmly chested the ball, and threw himself in the air, extending his leg and precisely kicking the ball past Argentina’s goalie through the sliver of unobstructed space into the net for the only goal of the game.

Instill innovation in your team

Even though the German players (many of them well-paid stars on different professional clubs) train together for only several weeks before the World Cup, they are renowned for their efficiency and organization. But they also have an extraordinary ability to creatively respond to game situations. Of course, the Germans have a multi-syllabic word for it—mannschaftliche—which means team synergy.

Low directs his players to think like entrepreneurs, searching for opportunities and dangers. Before games they discuss the strengths of their team and the strengths of their opponents as well those of the individual players. Based on that information they develop “if-then” strategies for specific situations so that the players can react quickly and in concert.

“Today’s generation of players wants to understand why something works—and how,” Low said in a lengthy pre-World Cup 2014 interview with the German team psychologist and a journalist from Zeit. “You cannot just say: ‘Do this! Now or never!’ I have to include them in the tournament strategy.” Whether the player is a “master or a substitute,” Low accords every player a major role on the team. Low is virtuoso of motivation. In a post-match press conference Low said that just before the end of halftime in extra time of the final match, he told Gotze to “show the world that you are better than Messi [Argentine soccer superstar] and that you can decide the World Cup.”